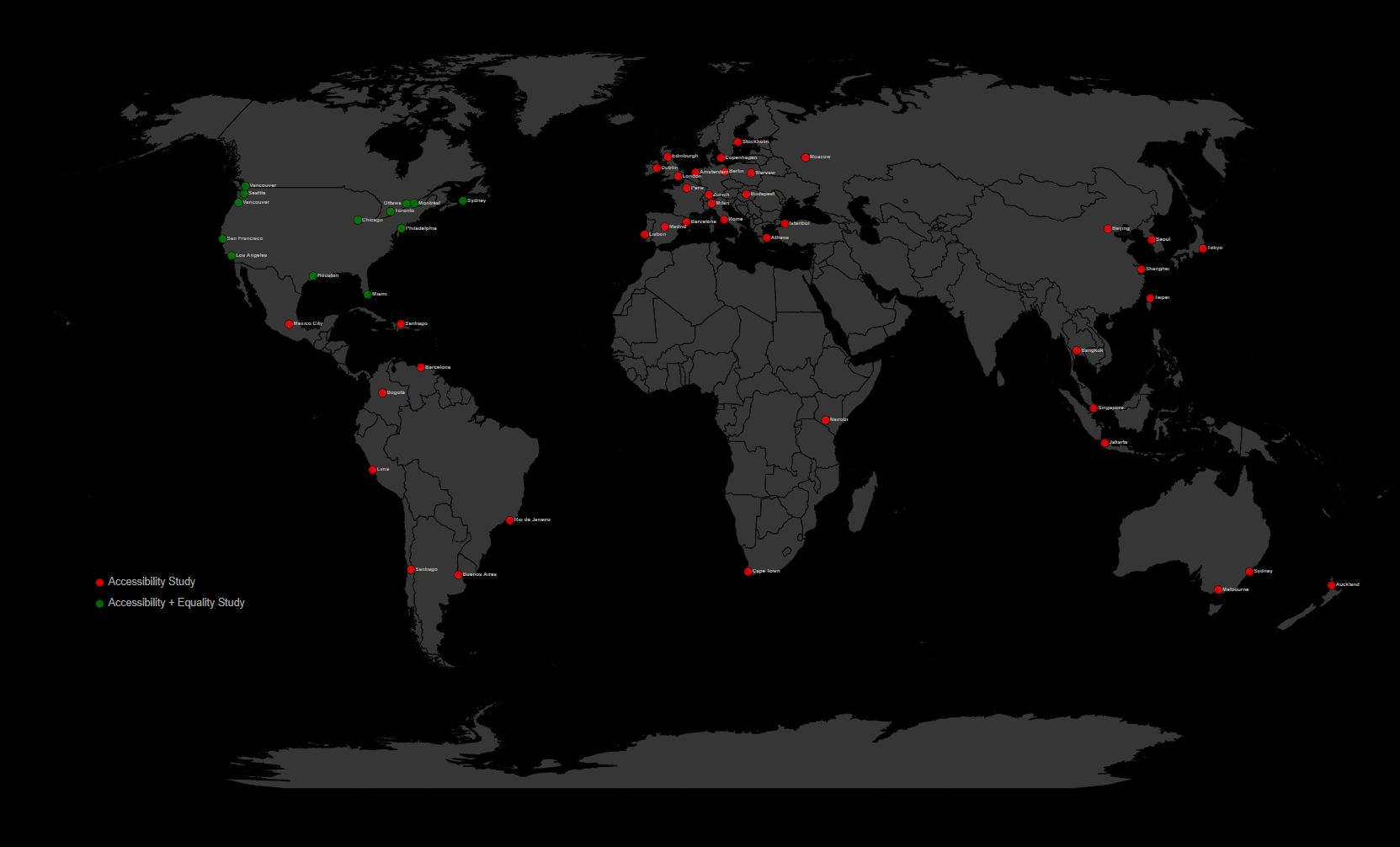 ities around the world have a history of segregation which has resulted in the concentration of urban poverty and the creation of strong inequalities between urban communities. The most pervasive causes of segregation, scholars have argued, are de jure, that is, they are rooted in law, public policy and other intentional government action. Until recently, in countries like the United States and South Africa, governments at the national, state, and local levels implemented explicitly discriminatory policies that determined where white communities and communities of color should live. State-sponsored segregation of this kind throughout the 20th century has shaped contemporary cities to be particularly unequal. In combination with de facto segregation (segregation resulting from private practices), state actions such as de jure residential segregation, restrictive covenants, and exclusionary zoning laws have forced low-income minority groups to live in deteriorated urban areas receiving a minor share of public investments.

Many of the inequalities that exist today in urban communities are rooted in access to essential infrastructure, with some urban communities benefiting from access to a wide range of services, while others being strongly under-served by essential infrastructures. Reduced access to infrastructure due to segregation has lead to poor physical and mental health, low levels of education, disproportionate unemployment, and many other undesirable effects in some urban communities. In an attempt to accommodate rapid urban growth and repair the damage that has resulted from segregation, urban planners and policymakers around the world have made equitable accessibility policies a central focus of contemporary regional and municipal planning.

Globally, cities have implemented policies aimed at improving the quality of urban infrastructure, and at reducing distributional inequalities in accessibility among urban communities. In the United States and Canada alone, more than 400 municipalities have implemented policies to encourage the development of “complete streets”. Such policies aim to create socially inclusive communities with improved access to services, shops and recreation; healthy, active lifestyles; more walking and less driving; attractive public spaces; and improved economic vitality. Such policy efforts are based on utilitarian principles where the aim is to bridge inequalities in access for all residents of a city. Using a utilitarian principle often worsens inequalities as it is blind to the distribution of benefit.

A distributed effort of scholars has shown how urban access to certain resources in a city is distributed based on one’s socio-economic status. While this evidence suggests inequalities in urban accessibility, most research efforts have focused on specific aspects of accessibility, such as transit or green-space, and specific social attributes, such as income or ethnicity. For example, Jang et al. (2017) have revealed inequalities in spatial accessibility to subway and bus services in Seoul, South Korea, as lower income residents were found to be associated with lower levels of accessibility to transit infrastructure. Through a healthcare lens, Mayaud, Tran, & Nuttall (2019) have assessed accessibility to healthcare facilities within major cities of the Cascadia region to demonstrate that inequalities in access to essential services still exist today. To focus on equitable urban planning, requires identifying the socio-economic disparities in accessibility through quantitative analysis that facilitates evaluating the distribution of access among and across cities worldwide.

Our research presents a decision-making framework to evaluate the differences in access to urban infrastructure afforded by different demographics of residents within cities. By taking into consideration more than 50 types of urban amenities and a combination of different accessibility measures, we quantify accessibility to different categories of essential services for54cities around the world. We find that accessibility in all cities is driven by a simple universal law, despite the geographical, historical, cultural, and political differences that exist across cities. We explain the functioning of this law through a power scaling function. By taking into consideration several categories of demographic attributes, we characterize urban communities and assess social equality inaccessibility in10of those cities. Our findings reveal the existence of systemic socio-economic inequalities across North American cities. In this context, we reveal opportunities for intervention by municipalities in addressing value-based solutions for providing equitable accessibility to communities from all socio-economic groups.

Data Storytelling as a Tool for Urban Planners

As part of this research, I am currently developing an interactive web page and web application for Urban Planners to incorporate equitable decision making within their policies. This data story,  fully developed using D3.js, is not public yet, but screenshots of the current state of its development are showcased below. Working code for this project can be found here. 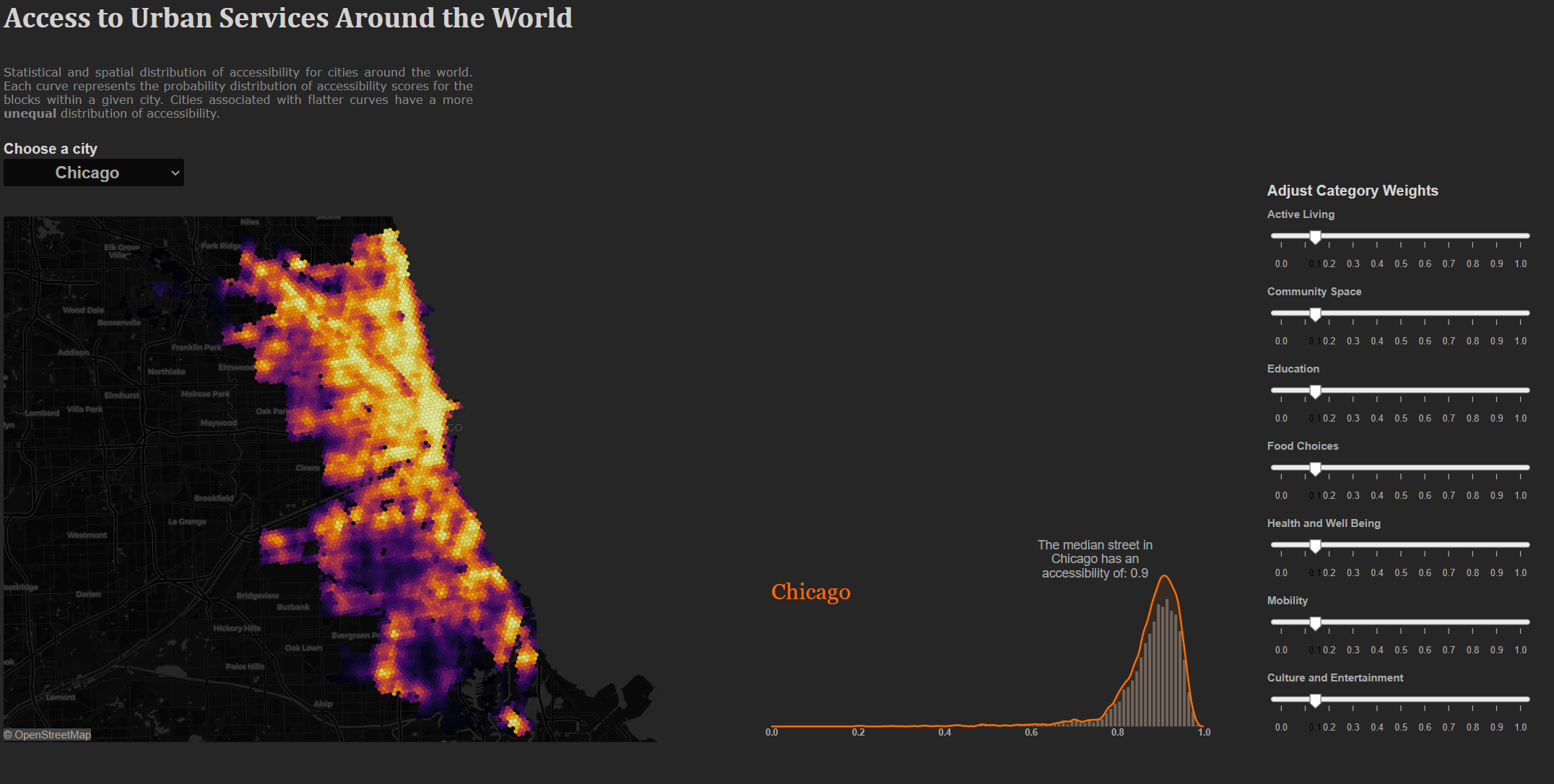