etro Vancouver is a federation of 21 municipalities, one electoral area, and one treaty first nation. In 2010 Metro Vancouver implemented the Metro 2040 Regional Growth Strategy, shaping a vision, goals and future directions for the region. Goal 3 is “Protect the Environment and Respond to Climate Change Impacts”. In this context, the Environment team within Regional Planning produced the “Ecological Health Framework”, which outlines a clear strategy to meet this goal. This document identifies a set of 10 ‘Regional Ecological Health Indicators’ to be mapped and quantified every six years. The role of these indicators is to measure and track aspects of the region’s ecological health, and form the basis for a regional ‘state of the environment’.  Two of such indicators are:
‍
Tree Canopy Cover: the leaves and branches that form a visible layer if one is viewing the region from the air, and the extent to which they cover the ground.
‍
Impervious Surfaces: surfaces, such as paved roads and buildings, that allow little to no water to pass through them.

Tree canopy cover and impervious surfaces are ecological health indicators but because of their connection to factors such as urban temperatures and storm water management, they are also indicators of how resilient communities may be to climate-related impacts. Looking at whether these indicators are distributed equitably across cities or regions helps us to identify communities or populations more vulnerable to risks and receiving fewer ecosystem service benefits.

Trees provide a range of important ecosystem services to people including shading, carbon storage, and stormwater management. Measuring tree canopy cover is a relatively simple way to determine the extent of the urban forest and the magnitude of services it provides. In the Greater Vancouver region, tree canopy cover measures 54% for the entire land base, and 32% for the urbanized portion of that land. These measurements are averaged, and there is great variation among neighborhoods and land use types. 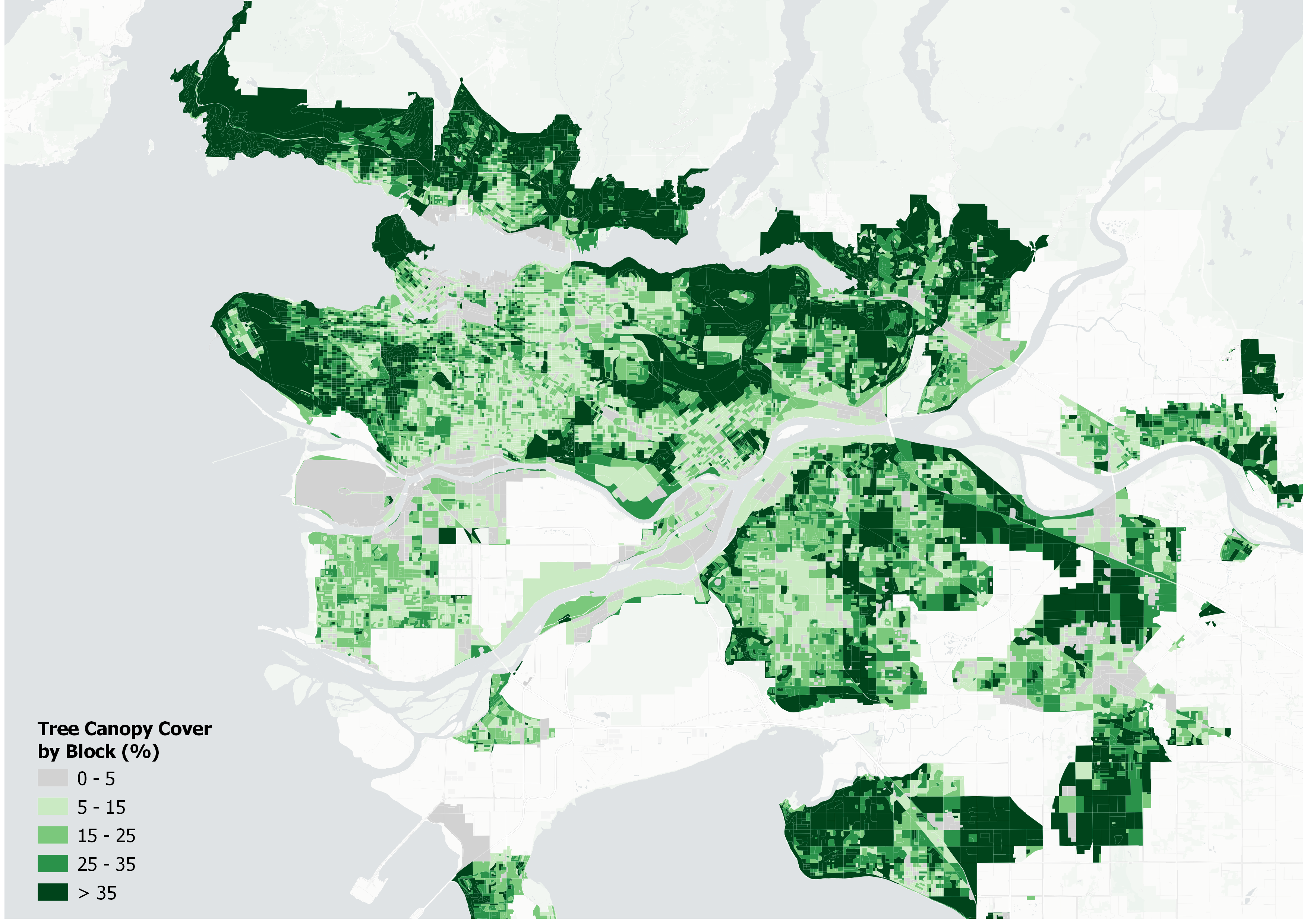 Ownership and Land Use Patterns

Overall, most of the region’s tree canopy is located within publicly owned recreation and natural areas, and within residential lands. The analysis found that 36% of all canopy is found on Recreation, Open Space, and Protected natural areas. Residential lands have an equally significant portion of tree canopy cover, with 36%. Of that 36%, 24% falls on “Residential - Single Detached with No Secondary Unit”. Finally, 11% of all existing tree canopy is located on road right of ways, and another 10% on “Undeveloped and Unclassified” land. 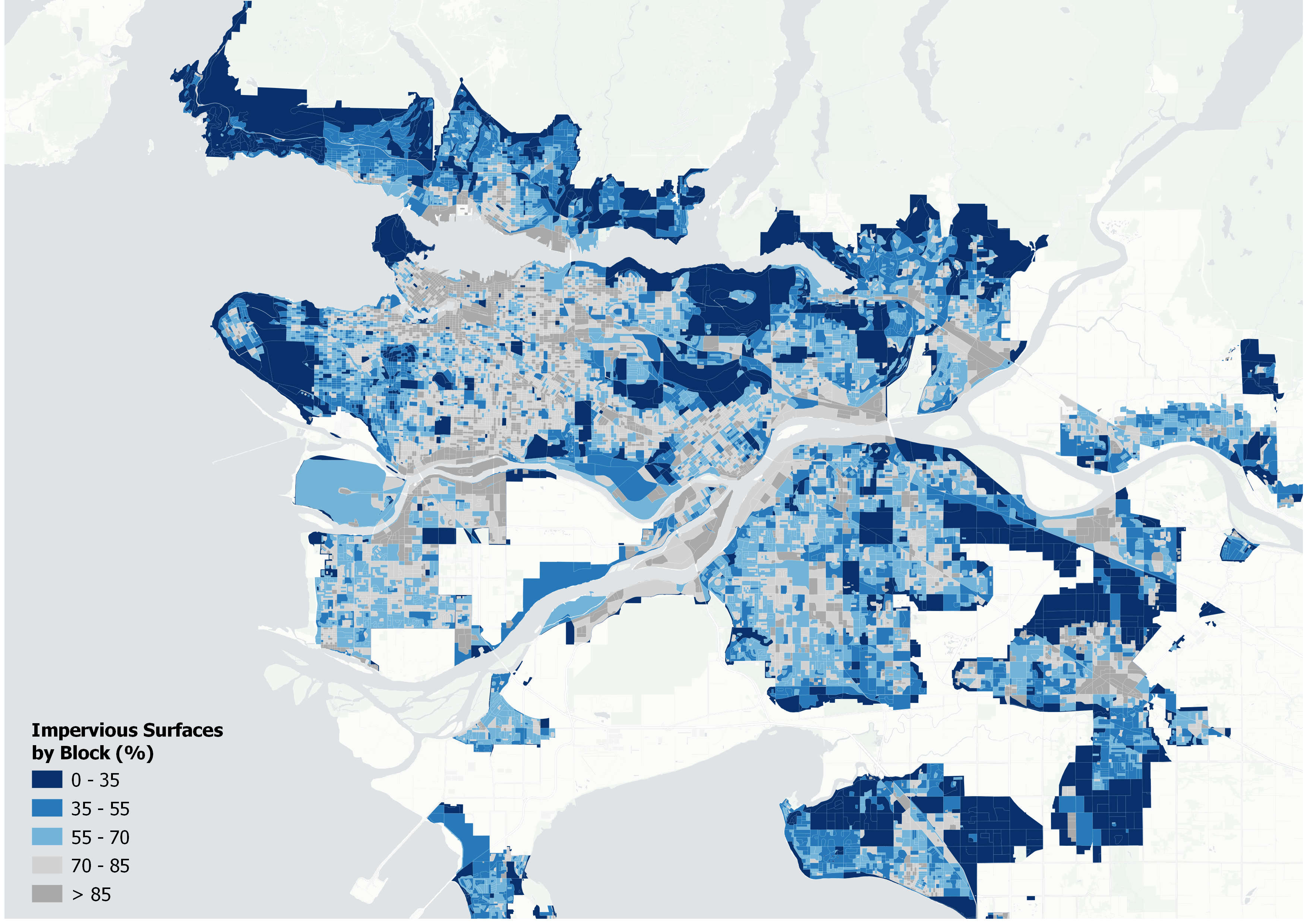 Ownership and Land Use Patterns

Extreme conditions for some land use types 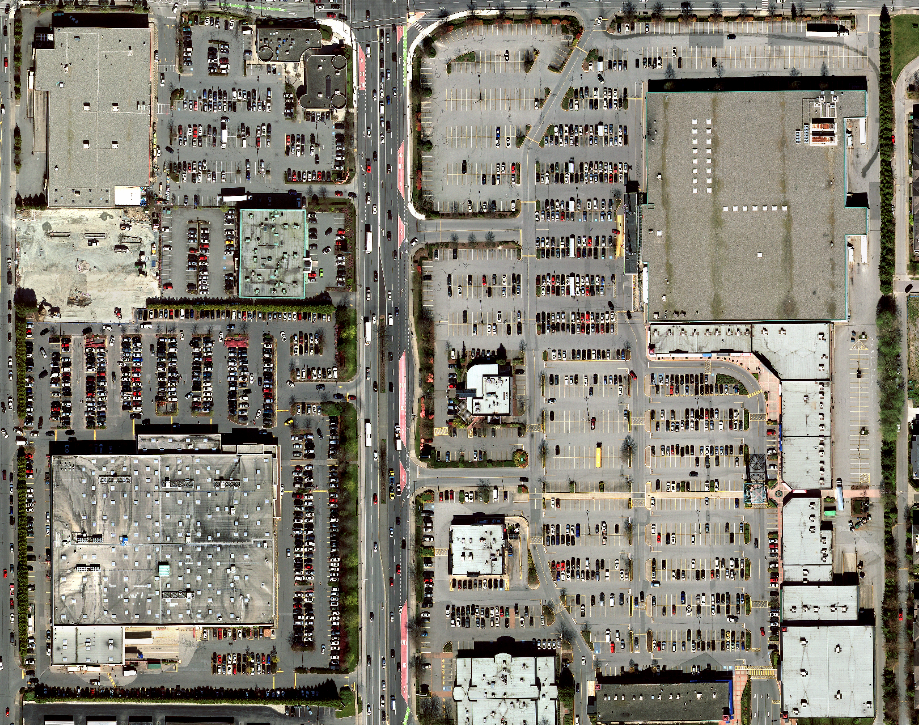 To explore how tree canopy cover and impervious surface has been influenced by trends in residential building practices, the relationship between the year of construction for residential parcels, and the amount of tree canopy cover and impervious surface currently found there was explored. For this analysis, housing types were split into two categories:
‍
‘High Density Housing’, defined as apartment oriented parcels with ‘Low-Rise Apartment’ and ‘Mid/High-Rise Apartment’ housing types. 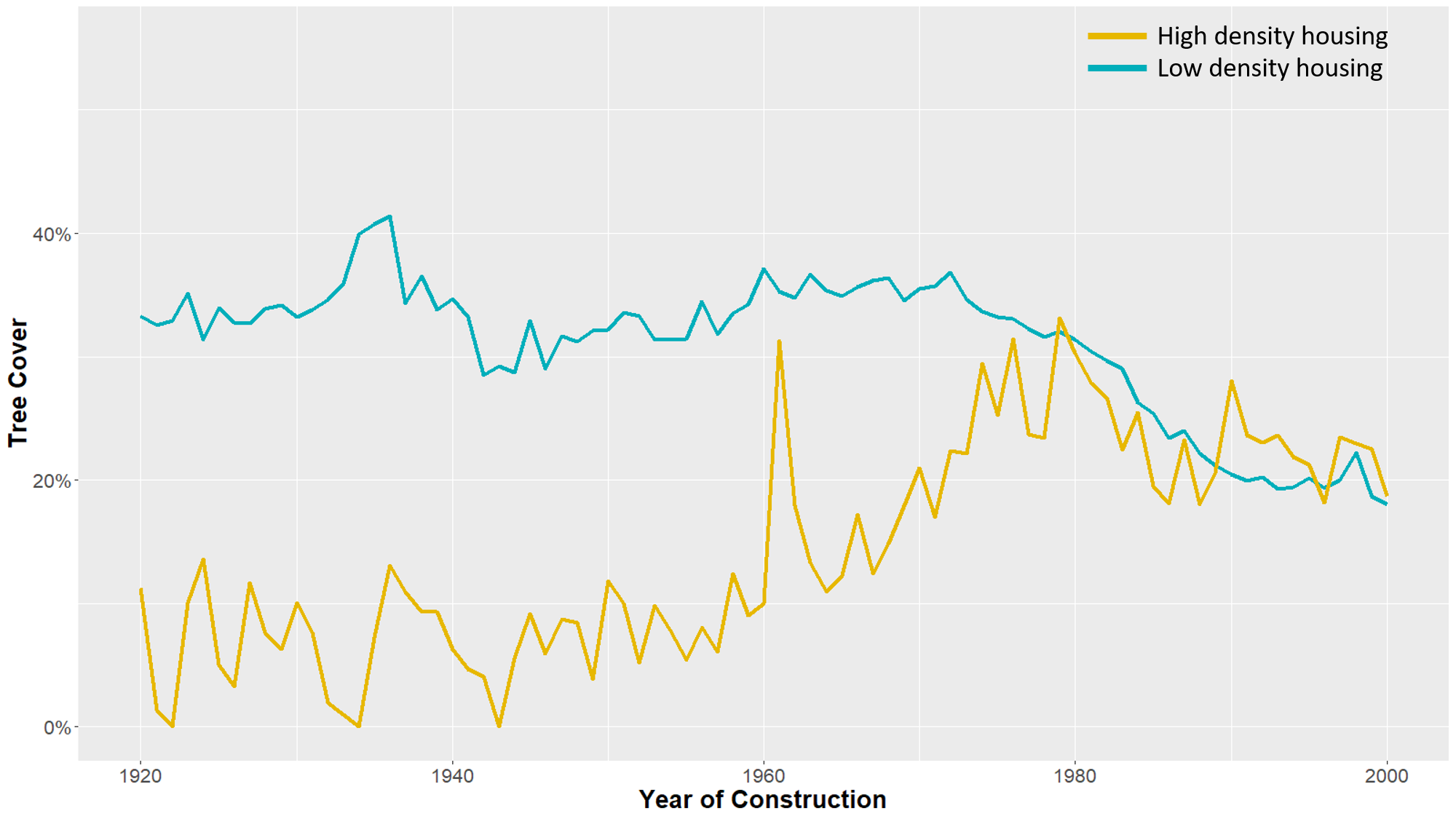 For almost every year since 1970, the average low density housing parcel has more % Impervious Surface today than the average parcel for the previous year. The analysis shows that there has been a consistent increase in average % Impervious Surface within the low density housing stock, from 49% for parcels built in 1970 to 75% for parcels built in 2012. 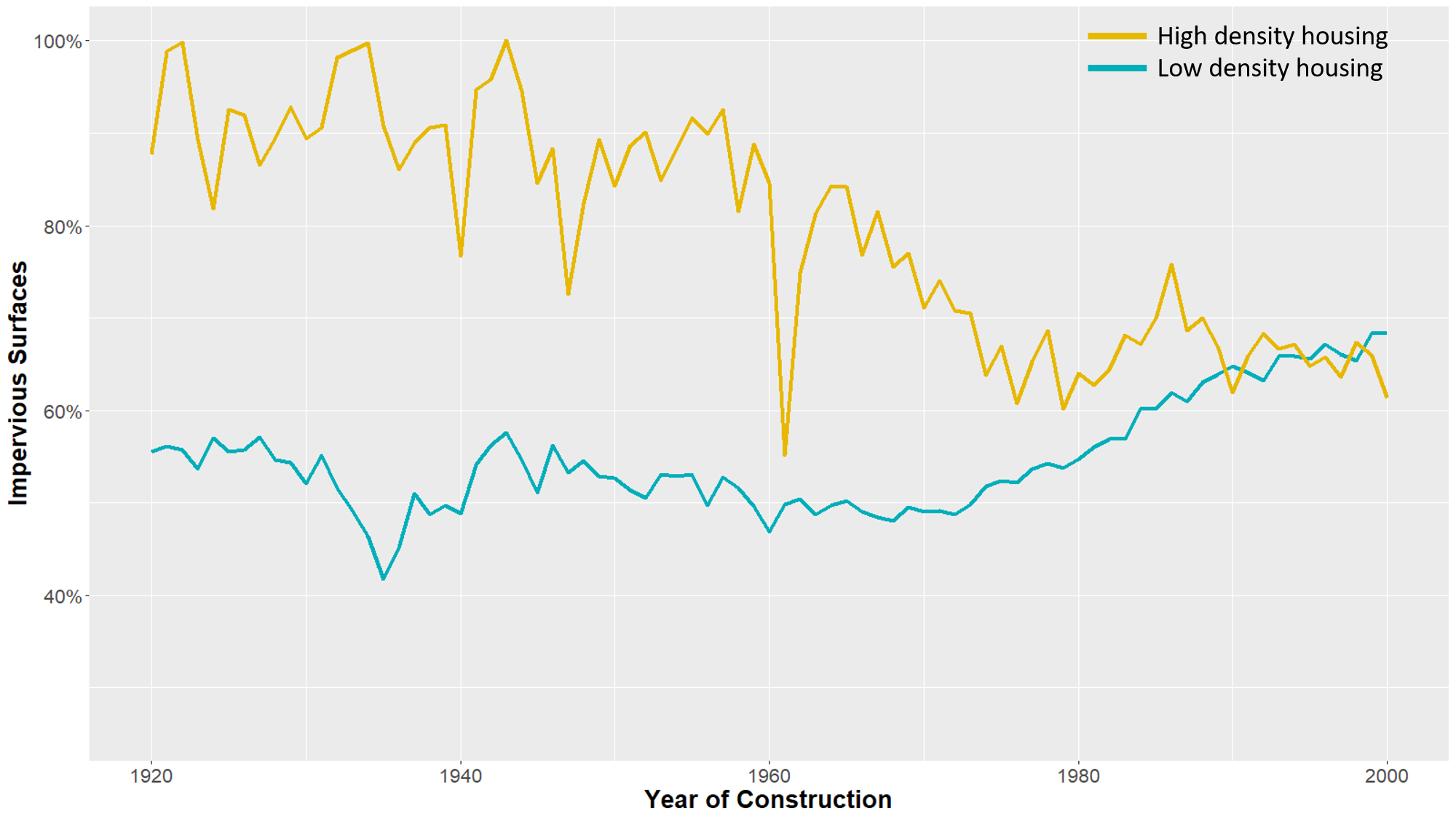 These trends show that, against conventional wisdom, high density housing (e.g. condos and towers) has accommodated increasingly more trees in recent decades, with a corresponding decrease in impervious surfaces. It is uncertain, however, what will happen in the future. Low density housing (especially single-family detached) appears to have shifted from a housing model that accommodated many trees to one that accommodates increasingly fewer trees and more impervious surfaces due to expanding home sizes and lot-splitting. These trends are likely to continue into the future. Let’s explore the historical context behind these trends.

The greater Vancouver region experienced rapid urban population growth starting in the 1960’s, which resulted in the subdivision of parcels in urban areas to accommodate more housing growth. While lot sizes shrunk, demand for bigger homes increased, resulting in increased lot coverage. This has resulted in less space for trees and an increase in impervious surfaces on low density housing parcels. If these housing trends continue (which seems likely), they may result in ongoing declines in tree canopy and increases in impervious surface.

High density housing prior to the 1960’s was composed of low-rise apartments which typically had high lot coverage and little green space. Economic growth and technological advancement in the region triggered a ‘skyscraper’ boom in 1960s, 1970s, and 1980s. The new skyscrapers were characterized by tall and slender buildings with low Floor to Area Ratio (FAR), and enough space between them to preserve view corridors. This Vancouverism architectural model featured residential buildings that used up little lot coverage and allowed abundant greenspace, street trees and other public space at the bottom. This may explain the observed increase in % Tree Canopy Cover, and decline in % Impervious Surface during the decades leading up to 1980. The West End neighborhood in the City of Vancouver is a good example of this phenomenon, where the majority of its residential high rises were constructed between 1960 and 198034. After 1980, % Tree Canopy Cover on high density housing parcels shows a slight decline but this is not matched with a corresponding increase in % Impervious Surface which have remained relatively steady. This suggests that since 1980, trees have been replaced by other types of vegetation (e.g. grass, shrubs) rather than increased lot coverage by buildings or other impervious surface.

Metro Vancouver’s population is projected to increase by about 1 million people over the next 30 years and this growth will be accommodated through both new urban development and intensification of established areas within the urbanized portion of the region. Thus, we explore how projected regional growth trends may impact tree canopy cover by looking at where growth is expected to occur. 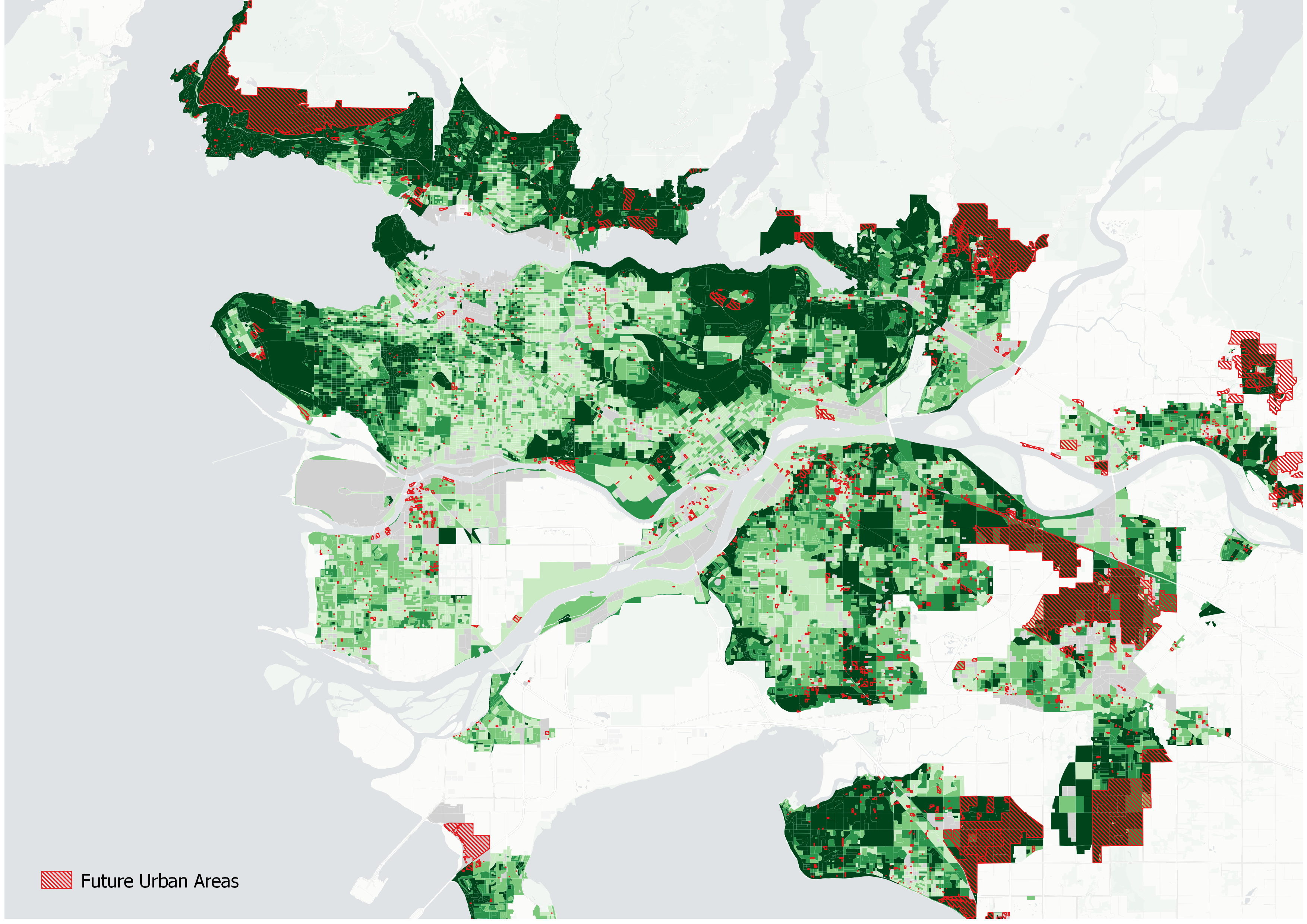 In the future, two main pressures are expected to impact Tree Canopy Cover in the urbanized region:

‍1. Development in Remaining General Urban Areas and Undeveloped Parcels
‍
‍Two areas that will incur significant losses in % TCC are the Future Urban Areas, and parcels classified as “Undeveloped”. Future Urban areas have been identified by municipalities as the land within the UCB that is planned for future urban residential communities. Undeveloped parcels are vacant urban land, and forested or vegetated areas not identified as recreation, open space and protected natural areas or agriculture. Combined, remaining General Urban areas and undeveloped parcels have 5952 hectares of TCC, or 20% of the total TCC within the UCB.

2. Redevelopment of Single Detached Housing within the General Urban Land Use Designation

Taking into account only the above two sources of loss, tree canopy cover within the UCB is projected to decrease from 32% to 28% by 2040.

Municipalities (including several Metro Vancouver member jurisdictions) often use tree planting programs as a way to maintain or expand their canopy, and actions such as these could help to offset anticipated future losses. To offset the projected decline in Tree Canopy Cover from 32% to 28% would require 1,100 to 3,000 hectares of the urbanized region to be dedicated to tree planting. To aid municipalities in such initiatives, the Metro Vancouver Potential Planting Area dataset was developed, which summarizes how much area is potentially available for tree planting. 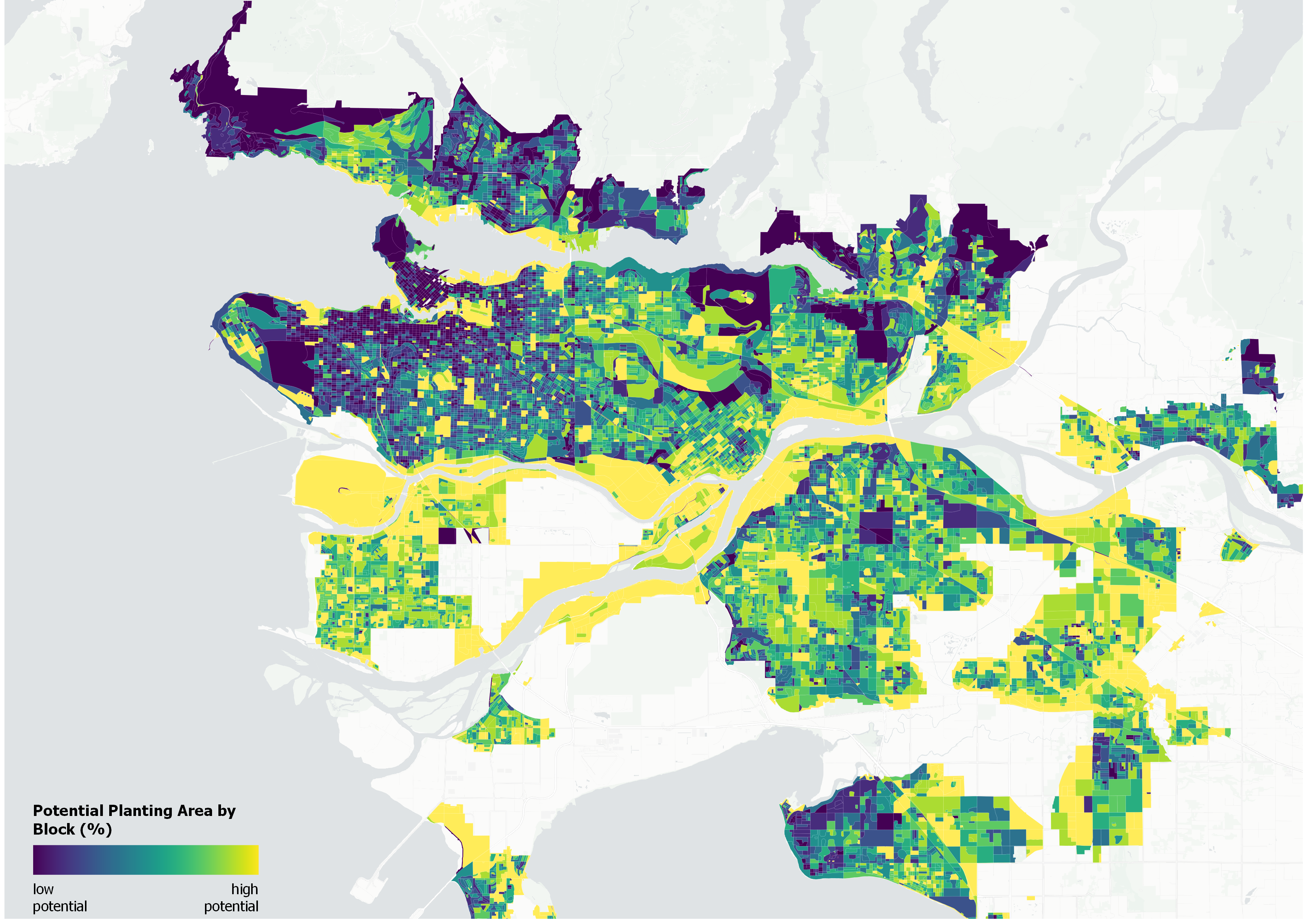 Potential Planting Area describes the amount of land that could theoretically be used to increase % Tree Canopy Cover. Potential Planting Area considers non-tree vegetation (grass, shrubs etc.), soil patches, barren surfaces, and pavement that does not fall on roads, that under the right circumstances, could be modified to increase % Tree Canopy Cover. It is a measure of what is physically possible, given the current land cover. Physically possible planting area does not necessarily translate into feasible planting area. Other factors, such as land use, also determine the feasibility of a site for tree planting. However, this tool is meant to remain general, in consideration that any conversion of land cover/land use types to tree canopy requires site specific assessments by land managers. This tool is intended to support discussions about how much and where land owners, member jurisdictions and Metro Vancouver might be able to increase tree canopy cover.

As with % Tree Canopy Cover and % Impervious Surfaces, % Potential Planting Area was mapped and quantified for the Metro Vancouver region. The analysis found that an area of 31,710 Ha (35%) of the urbanized region was found to be vegetated potential area and 19% is impervious potential area. 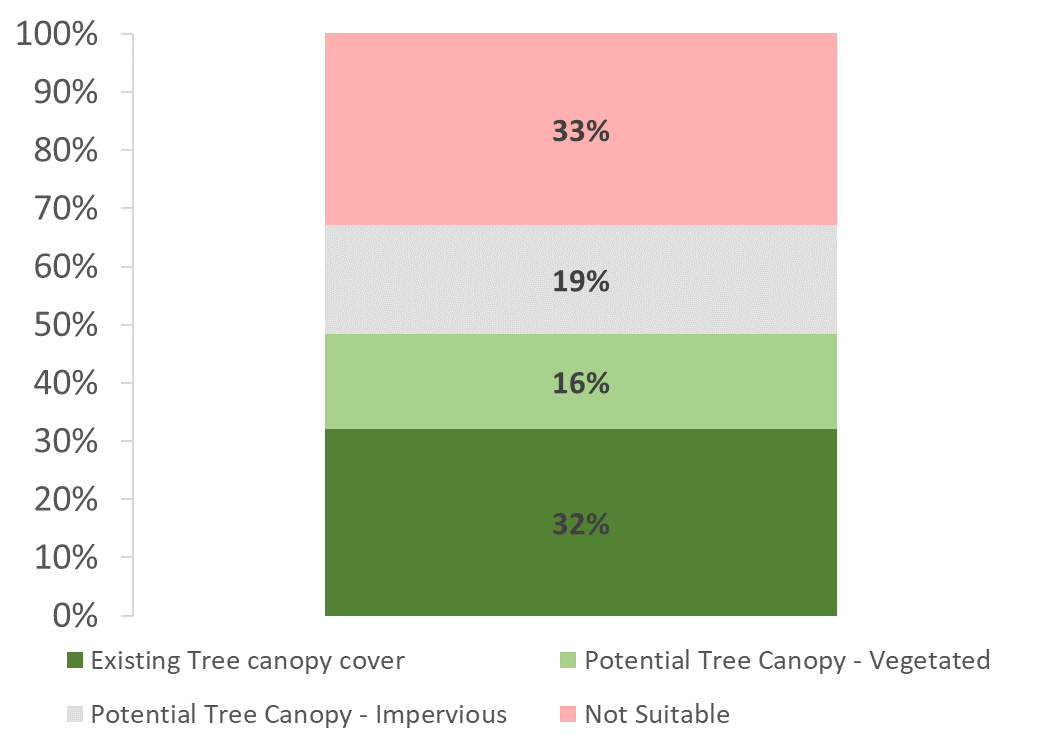 In conclusion, tree canopy cover in the greater Vancouver region is in decline, measurably. Impervious surfaces are most likely increasing as parts of the region urbanize. There are, however, opportunities to turn these trends around. As outlined below, metro Vancouver, member jurisdictions and other land owners and managers all have a role to play in maintaining tree canopy cover and reducing impervious surfaces.The following recommendations are provided for consideration, as appropriate:

‍1. Monitor the extent, distribution and status of the tree canopy cover and imperviousness to inform planning and management.

3. Consider focusing tree planting efforts in areas of low canopy cover, particularly when these coincide with areas of high density and vulnerable populations in support of regional and municipal equity.

5. Adopt and enforce bylaws that protect trees wherever possible, and require trees to be replaced when development results in loss.

6. Prioritize the retention of existing mature trees wherever possible when planning new urban communities as these provide the greatest amount of canopy cover and ecosystem services.

8. Look for opportunities to integrate the objectives of maintaining tree canopy cover and reducing imperviousness into a broad range of departments, plans, and strategies so responsibilities become a shared goal.

9. Given how much tree canopy and impervious surfaces fall within residential areas in the UCB, engage with the public about the importance of tree canopy and its protection, along with the benefits to maintaining permeability. These efforts could be supported with programs to encourage tree planting and maintenance of existing trees on private land.