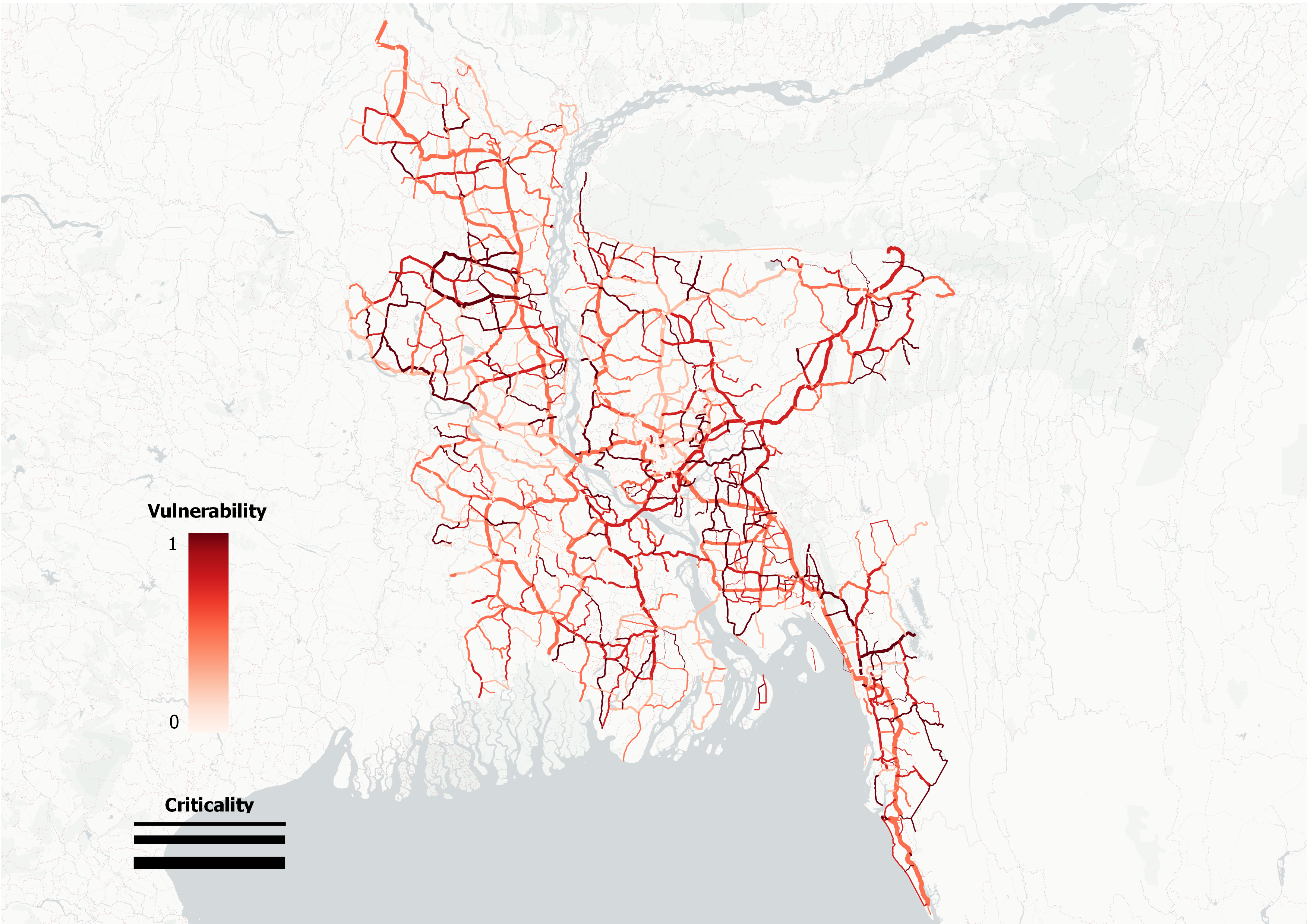 angladesh, home to 161 million people, is a country located east of India on the Bay of Bengal. While the country is home to a rich culture and pristine natural ecosystems, it is also associated with some of the world’s most unpredictable and devastating climate patterns. Bangladesh has a subtropical monsoon climate characterized by extreme seasonal variations in precipitation, humidity and temperature, and frequent extreme flooding events such as cyclones. Since the 1950s, Bangladesh has experienced more than 40 cyclone events, each killing up to 150,000 people, the most recent being Cyclone Bulbul on November 9th 2019.  The United Nations estimate that a cyclone of high magnitude in Bangladesh’s southern provinces would threaten the livelihoods of at least 2 million people and would severely damage key transport infrastructure elements such as bridges and roads.

In the case of a major cyclone event, there can be significant damage to the country's infrastructure network, which can have serious implications for the delivery of relief goods and the ability of local and international organizations to provide aid to those in need. In order to understand where to focus infrastructure investments, there is a need to assess which portions of Bangladesh’s road infrastructure are most important to maintain under normal and potentially extreme circumstances (i.e. criticality). There is also a need to understand which portions of Bangladesh’s road infrastructure are more susceptible to damage during a natural disaster (i.e vulnerability).

The criticality of a road segment is determined by the importance of that segment. The importance is in this case determined by the economic importance, based on the amount of goods transported. The more goods are transported on a road, the higher the criticality of that road. The total amount of goods transported on each road is calculated by taking the normalized average weight that can be carried by each vehicle type times the actual number of each vehicle type on a given road.

Assessing criticality of the Bangladesh road system requires that we investigate national traffic patterns. By scraping web pages from Bangladesh’s Road Maintenance Management System (RMMS) database, we collected data on daily, yearly, and monthly traffic for each road and road segment that exists in Bangladesh. A number of transport modes are used in Bangladesh, and by investigating which are more popular than others and where certain modes of transport occur most we can obtain more insight about criticality within the road system. In the visualization below, we illustrate Bangladesh’s top 10 busiest roads and the main vehicle types responsible for congestion on each road.

How to Read the Diagram

In the graphs below, we explore traffic patterns further along Bangladesh’s 10 busiest roads, where the vertical axis represents traffic density and the horizontal axis represents road chainage (the distance traveled on each road).

Bangladesh’s most Critical Road: the N1

The N1 is one of the longest roads in Bangladesh, and it is by far the most critical road in the country. It receives more than 1 million vehicles per year, of which around 600,000 are small, medium, and heavy trucks. By combining data from RMMS database with a discrete event simulation model, we obtained insight into daily traffic density patterns by vehicle type for an average day on the N1 road.